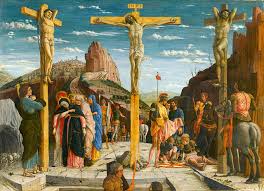 Today is Palm Sunday in Liturgical Christian circles. It begins the week known by many as “Holy Week” and it focuses on the Last Supper, arrest, trial, crucifixion, death and resurrection of Jesus, the Christ. Many devout Christians — let alone those for whom Christianity is only a set of moral principles– have not had the opportunity to go deeper into the meaning of this week and the liturgical celebrations that the Christian Community participates in. The meaning of these rites goes far beyond what is seen on the surface, and, in many cases, even beyond the words and gestures used in them. I want to focus on two aspects of Holy Week: first, what the experience of Holy Week creates for us (the transcendence of time itself), and, second, the real meaning of these rites, once it has been freed from an anachronistic focus on “sin.”

The key to understanding how the rites of Holy Week mess with time itself involves looking at the Passover Haggadah to appreciate an aspect of time known to the ancients but lost to much of western Christianity centuries ago. Let us read the opening words of the Haggadah:

We were Pharaoh’s slaves in Egypt: and the Lord our God brought us out from thence with a mighty hand and an outstretched arm. . . .

The little words are important: “now we are slaves;” “we were Pharaoh’s slaves in Egypt;” “the Lord our God brought us out from thence.” The Passover celebrants perform certain rites and recite the stories behind them with the conviction that the entirety of the experience of the Passover is happening in real time to them. Sitting around the table, they experience the slavery, the plagues visited on Egypt, the death of the firstborn of the Egyptians and the passing-over of the angel of death, the escape from slavery and the safe passage through the Sea of Reeds, the giving of the Law through Moses, the wandering in the desert and the final passage over the Jordan and into the promised land. These seemingly separate elements make up one single event: known as the Passover. And they — those seated around the table — are there.

The Greeks had a name for this “making the past present.” They called it “anemnesis.” Superficially, it can be translated by our English word, “remembrance,” but, in fact, it describes reality that is the exact opposite of what we mean by that word. For us, remembering something means thinking back to something that happened in the past. Anemnesis means making that past event present so that we become involved in it. No longer bystanders or observers of a newsreel from long ago, the event is actually happening to us. Anemnesis takes us from audience to actors.

In this quote from the Gospel of Luke [23:19], Jesus tells his disciples to get involved: touto poieite eis ten emen anamnesin (“do this in remembrance of me”). Our understanding of the Last Supper of Jesus with his disciples takes on a whole new dimension. First, it is a Passover meal, bringing into the present the entire Exodus experience. Next, Jesus is making present for his disciples his death and resurrection which will take place in the following few days, and making them actors in this new Passover (from death to life) before it has even played out on Golgotha. In this case, anemesis makes present even future events!

The Christian Eucharistic liturgy involves the Christian Community carrying out Jesus’ instructions: making present the whole of salvation history from Abraham to the end of the world (however we want to imagine it)j. It most especially brings into the present the Jewish Passover from slavery to freedom and Christ’s (and our) Passover from death to life. So, when we talk about Christ’s presence in the Eucharist, it’s more than just a symbol, it’s even more than a physical presence. It means that all of history has collapsed in upon itself for us in that moment and we are no longer passive observers, we are implicated as eye witnesses of Christ’s offering of himself up to death to reveal the resurrection. It’s happening to him, yes, but we are there and it’s happening to us, as well.

Now, we can talk about Holy Week. Anemnesis is not limited to just a few words or a few moments in a liturgical ceremony. The Christian Community reserves this one week out of the year as a great, seven-day-long anemnesis. If we are aware of what’s happening, we’re not only “remembering” Jesus’ last week with his disciples, culminating in his resurrection, we are living it. Everything from Palm Sunday through Maundy Thursday and Good Friday to the Easter Vigil and Easter day is about us as much as it is about Jesus. “We were Pharaoh’s slaves in Egypt: and the Lord or God brought us out from thence with a mighty hand and an outstretched arm.” We were (spiritually) dead, and now we live — “I have been crucified with Christ and I no longer live, but Christ lives in me. The life I now live in the body, I live by faith in the Son of God, who loved me and gave himself for me” [Galatians, 2:20].

Finally, I want to address briefly an emphasis regarding Holy Week that I believe has been misplaced and badly misrepresented (often by very well-educated and well-meaning people). Some have taught (and the Christian Scriptures tend to support this) that mankind, in its sinfulness, owes an infinite debt to God that we are incapable of repaying. In this view, Jesus, as human, offers himself, as divine, to God as a worthy sacrifice, a full repayment, of our debt. As such, we owe a debt of sin; Jesus has paid that debt; therefore we are redeemed (as from bondage). Even our Christian liturgical texts pray constantly for forgiveness of sin. That theme is certainly present, but I do not believe that it is the primary focus. In the words of the liturgy, Christ has “destroyed death and restored life.” Holy Week and Easter, in particular, are all about life not sin.

Jesus revealed through his crucifixion and death that God does not know death, and so our fears — which are ultimately traceable back to our fear of dying, or even ceasing to exist at all — are empty and in vain. He revealed that our real slavery is bondage to the fear of death. All the symbols of Easter — fire, light, water, and the communal meal — are symbols of passage through death to life. Going down into the water (Baptism) is not so much a sign of “washing” sins away, but of dying and rising again! It’s about going into the grave and beyond! Some say regarding death, “No one has come back to tell us about it.” Really? Then what is Christianity all about? It’s an anemnesis of death-to-life. Saint Paul [1 Cor 15:54-55], quoting the prophet Hosea, wrote, “When the perishable has been clothed with the imperishable and the mortal with immortality, then the saying that is written will come to pass: ‘Death has been swallowed up in victory.’ ‘Where, O death, is your victory? Where, O death, is your sting?’ ” (Hosea [13:14] wrote,  “O Death, where are your thorns? O Sheol, where is your sting?”) And we proclaim in our anemnesis as a Christian Community’s liturgy, “Dying you destroyed our death; rising you restored our life; Lord Jesus, come in glory!”

Now, I invite you to go and walk into Jerusalem with the crowds, sit with Jesus in the upper room and share his body and blood, join him at Golgotha and enter the empty tomb with the apostle John. As you join him in anemnesis of his suffering and death, you will join him by faith in his resurrection and share to the fullest with him in a life beyond our imagining.